A Faire to Remember 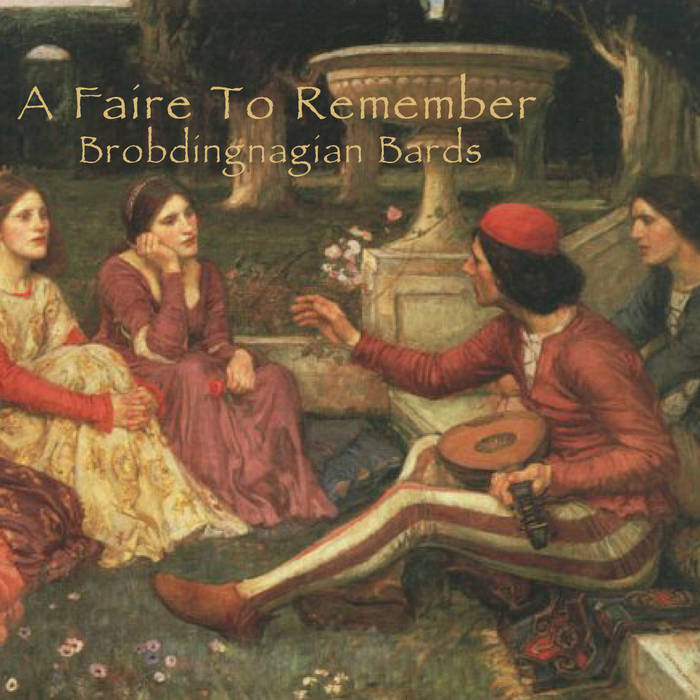 NOW YOU CAN ENJOY RENAISSANCE FESTIVAL MUSIC ALL YEAR LONG

The Brobdingnagian Bards are fast becoming one of the most popular acts at Renaissance Faires. This is due to their sometimes romantic... sometimes comical... and always enjoyable style of Celtic Renaissance music. This success has made them the #1 Celtic band on MP3.com with millions of downloads and a grow growing legion of ren faire music fans worldwide.

To celebrate their love of faires, they recorded, A Faire to Remember. It features seventeen great tracks of Renaissance faire favorites, including the hit song, "Do Virgins Taste Better Medley" and the song you'll hear on Dr Demento, "Donald, Where's Your Trousers? Medley". You'll also find their former #1 Celtic rendition of "Scarborough Faire". But the music gets even better with the Bards' pick of the Top 10 Renaissance Faire songs of all time.

To fill out the album, the the Brobdingnagian Bards feature their personal renn faire favorites including their Barenaked Ladies parody and hit song, "If I Had A Million Ducats" and Tom Lehrer's "Irish Ballad". The album finishes out with their unique interpretation of the Monty Python song "Always Look on the Bright Side of Life".

A Faire To Remember continues to garner praise and reviews from fans everywhere. It was even the #1 World/Folk album on MP3.com. And it is by far, the #1 album of Bard fans. If you're looking for the perfect introduction to the music of the Brobdingnagian Bards, look no further than A Faire To Remember.


ABOUT THE BROBDINGNAGIAN BARDS

The Brobdingnagian Bards (pronounced brAHb'ding-näg-EE-en) are The Original Celtic Renaissance music group from Austin, Texas offering free Celtic mp3 downloads. They perform a unique style of music combining Scottish and Irish folk songs with music inspired by the Lord of the Rings, performed on non-traditional instruments--autoharp, recorder, and mandolin.

In just five years, they've completed six studio albums and performed coast-to-coast. Ask their fans, and they'll tell you The Bards are just plain "fun!" Which makes sense since, after all, they just love the music.

The first time someone in the audience yelled "Freebird!", with a knowing wicked smile, we played it. They were quite surprised and told us it was the best version they'd ever heard!

Going to McDonald's—the breakfast of champions!—every morning before faire while dressed in garb.

Composing songs while we stroll the faire.

Driving to Castle Muskogee, while crossing the state line, Marc breaks into "O............klahoma!"

Flying to Kansas City for a faire, Marc busts into "Everything's up to date in Kansas City..."

Performing at the Fairy Picnic at TRF as the "Bobbling Goblins."

Meeting people at faire who can actually pronounce our name, and/or know its meaning and origin.

Performing "Always Look on the Bright Side of Life" at the Italian Gazebo at TRF 2000 as a storm flooded the faire. Then busting into "The Unicorn Song" as people huddled around us on the covered stage, an unofficial 'Andrew's Ark!'

Being the only men to crash the maypole at TRF and dance with the 'Maypole Maidens'... We are Korobushka fanatics!!!

Marc demolishing Andrew and others in the TRF Calf Contest, singing "None But A Harper." Andrew still thinks it was rigged.

Playing the Robin Hood Medley ["Robin Hood and Little John, running through the forest."] for The Sheriff of Nottingham and Maid Marion as Robin Hood came to save the day.

Playing "The King's Song" for the King of the Castle Muskogee and watching him try to keep from cracking up.

The Soup Kitchen at Stroud in 110 degree weather. Thank God for the cold Strawberry Soup.

Jamming with the Bedlam Bards before Excalibur 2001. Cedric the Fiddler is the all-around coolest bard of the year!

Andrew doing a perfect swan dive into the bulging cleavage of a tuner-stealing wench in order to retrieve said tuner...with his teeth.

Seeing the smiles of vendors every morning as we played for them.

Playing for the TRF cast at the end of every day after the crowds had gone home.

Playing "Pachelbel's Canon" for The Rogues while they slept at the back of our stage.

Finding our first patron—Dragon of Chaos—the best hawker we've ever had, who might have been 'in his cups' a wee bit often, but who has a heart the size of a dragon.

The incredible support we've had from every Ren Faire act, including: Noble Cause, Jack Scratch, Bedlam Bards, The Rogues, Tudor Tarts, Seymoure, and many others.

Playing "Happily Ever After"—a song about a strong, independent heroine—at WTRF, we invited a young lady from the audience to be part of the performance. It wasn't until *after* the faire, we discovered she was blind. Perfect symmetry between Life and Art!

Andrew performing the "I Have A Dream" speech at the end of a show with a standing-room-only audience, including people falling from the trees!

And the ultimate proof of 'Nagian Group Solidarity and Mutual Trust: Walking in TRF's Silver Masque parade, Andrew wearring a mask that didn't fit him, so Marc guided him through the parade around the horse droppings, and Andrew could not see anything but Marc's feet.