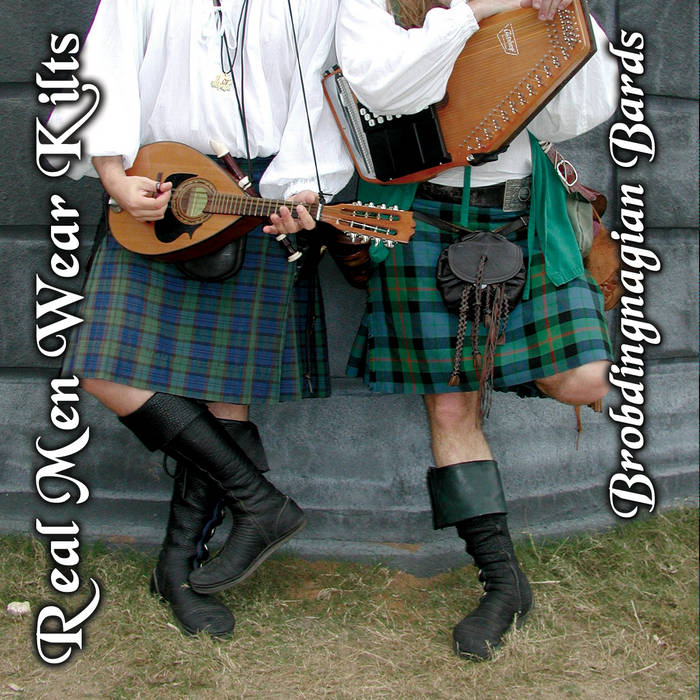 The latest CD from the Brobdingnagian Bards, "Real Men Wear Kilts", is six years in the making. I remember how it started too.

We were in Salado playing an evening party for Clan Gunn when our friend Royce implanted the idea that we should do a Scottish CD. We had just finish "Songs of Ireland", and I was already thinking about it too. I'm Scots-Irish but never really embraced my Irish half until recently. To me, I was all Scottish! I've long wanted to record more Scottish songs, but somehow fate intervened and most of the music I learned was Irish. Who am I to go against fate?

That didn't stop this idea. We didn't know many Scottish songs back then. But I had quite a few I wanted to learn. So we started learning them.

Shortly after that I designed some free Real Men Wear Kilts stickers to giveaway. Then my friend Jen Clower-Brown redesigned them to the current style.

Time passed and still we hadn't touched this CD idea. Finally in January of 2007, something clicked inside us. We learned and accepted something about us as a band.

You see the Brobdingnagian Bards are not a typical Celtic music group. I love keeping traditional songs alive, but as a group we, well, we have fun with the music. We play around with the lyrics pronunciations. I can't begin to tell you how many people have emailed and said, "It's TROOSERS, not TROUSERS!" Other Scots laughed when I sang "Loch Lomond" with an Irish accent a few years back.

Well, we don't sing with accents nearly as much as we did, but when you're an American singing songs written in the Scots dialect, you have to make a few decisions. Do you rewrite songs? Do you use them as is?

For us, nothing is sacred we do what we do without apology... with one caveat. We want you to know what to expect. If you're expecting some contemporary Celtic sound from Scottish musicians, listen to Ed Miller. He's outstanding. If you're expecting us to not screw up the Scottish dialect, think again.

All in all, I think Andrew said it best, "We're not Scottish. So we're crap!"

That said, our eleventh album, "Real Men Wear Kilts" is here. It is an album of Scots-Irish music for people like us. Photo is by Jen Clower-Brown.